Angus Producer of the Year
State of Nebraska 2021

Raising Registered Angus is a Family Tradition for the Grays

Gray's Angus Ranch has a long history in the Angus business and their recent award is just one of many humbling accomplishments along the way for this Nebraska family. 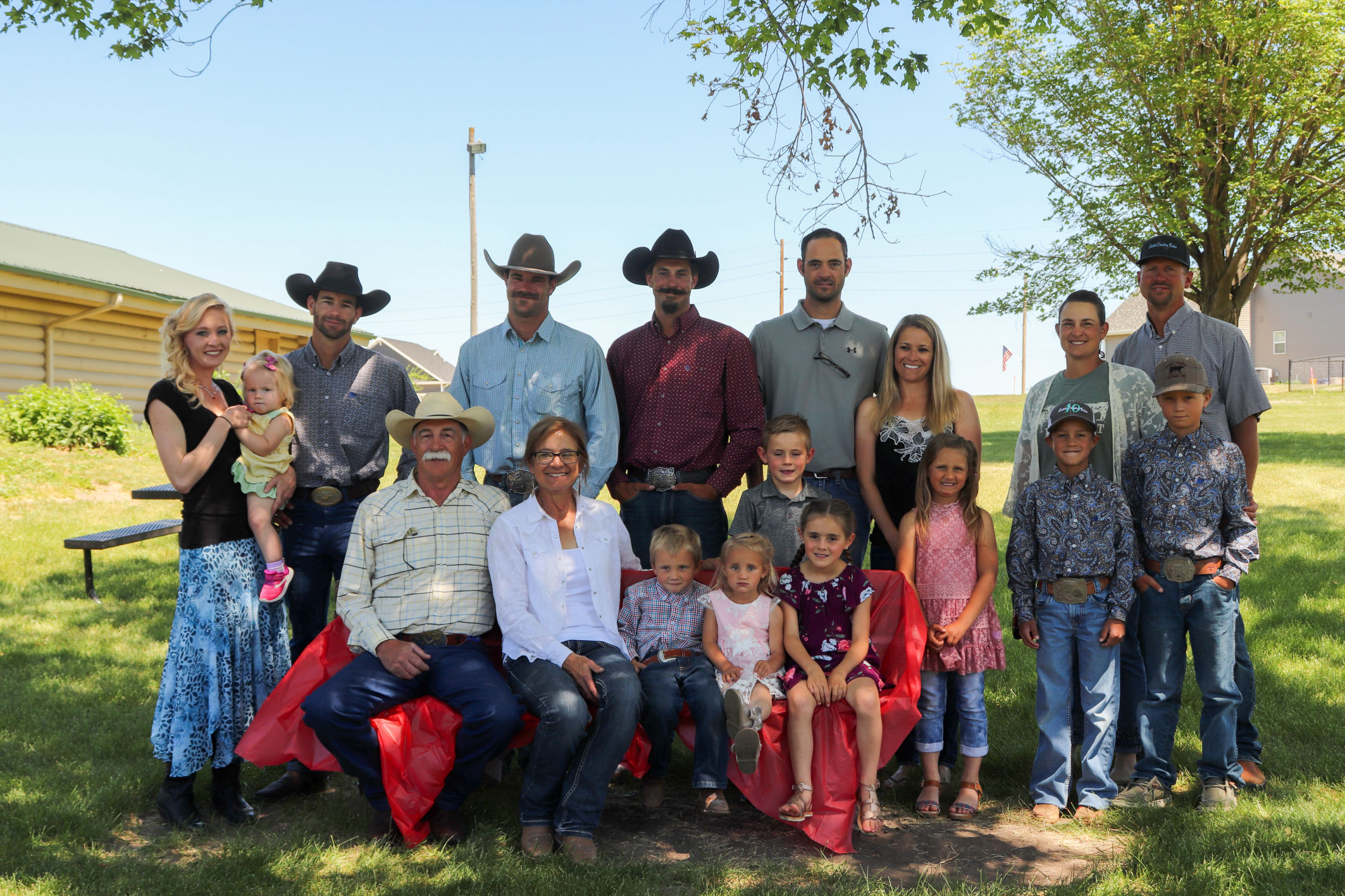 wife’s father, Art Fuller and held Public Auctions of “Richly Bred Angus Cattle” in the 1940’s. Wayne Gray, Rod’s dad, built the Angus cow herd to 400 registered females and sold bulls private treaty. At the age of 15 Rod purchased his first bull from the “Champion Pen of 3” at Denver, a son of Ankonian President. Rod grew up active in the Iowa Jr. Angus Association, including serving as its President. He showed their own Angus breeding stock in 4-H, Progress Shows, IA State Fair, and the Denver Stock Show.

Rod and Laura moved to Nebraska in 1983 and have raised their family in the Angus business. Their children were active in the NE Jr. Angus Association, Naomi was Nebraska Angus Queen and a finalist for Miss American Angus. They showed at AKSARBEN, National Jr. Angus Show, Progress Shows and 4-H. Rod served on the NAA Directors and was 1992-93 President. He served on the NE Beef Check-Off Board for 8 years and traveled to Central and South America with USMEF promoting beef. In 1997, the family picked up roots, cattle and all and moved west to the Wyoming border southwest of Harrison. They hosted the Nebr. Jr. Angus Show at Ft. Robinson, as well as a couple NE Angus Tours. They have exhibited at Husker Harvest Days and at the NE, WY, and Central States Fairs, the NILE, Denver Stock Show, Western Junior Stock Show and Black Hills Stock Show. In 2008 Gray's Angus bred and raised steers won the Champion National CAB Angus Source Carcass Challenge. They have also exported Registered Angus breeding stock to Russia and Turkey.

Today, living on the ranch, doing daily management are sons Heath and Garret, along with Rod and Laura. The ranch has pivots for raising alfalfa and corn silage for winter feed. At an altitude of 4600 to 5000 ft., the growing season is about 90 days. Colt and Riyatta and daughter Keirra are close by on Wyoming property and regularly help out. Levi, Sarah and their kids Cooper and Kendall, take in Gray’s pairs for the summer on their ground in White River Country. Naomi and Jeff Pelster and their family, Chisum, Ruger, Linnea, Canton and Kimberlynn ranch north of Harrison on the Coffee War Bonnet Ranch. They have Gray’s Angus bloodlines in their cow herd and have a yearling operation. Grandpa Rod has started the seventh generation showing Angus breeding stock and Chisum had Champion Angus Bull at the WJLS in Rapid City this fall. They all take this Angus cattle business seriously and help out big time with the Spring Bull Sale, branding, and ranch work.

This time of year the Grays are sorting through the 400+ bull calves, picking out the top 1/3 to keep for sale as bulls. Careful selection for a “Complete Package” including dam production, performance, profitable EPD’s and soundness being closely monitored. Later born calves are held over for our 2 year old buyers. The bulls are developed at the ranch on a sensible, low concentrate diet with ample room to exercise. Heifer calves are also wintered at the ranch, synchronized and AI’d before trailing to grass for the summer. Calving usually starts the first of February with AI and ET calves. All the pairs leave the main ranch for the growing season. They have several environments for the herd and the cows get a variety of challenges from year to year. At White River and Deep Creek, south of Crawford, the terrain has very steep ravines and is covered with pine trees. Up at Provo, SD the pairs face sparse water, treeless and drought susceptible gumbo. Sioux County hard grass is great, also drought susceptible, a high plains, shortgrass prairie.

With hardy Angus bloodlines tracing back to the original Gray cow herd, these females have been tried and proven to perform in various range conditions and terrains. The cows go to work, take care of themselves and their calves and rebreed to do it all over again the next year. The steers are fed in a feedlot and consistently finish with an ADG over 4.5#/day, carcasses grade 95% choice and higher, 57% CAB and Prime. Grays are all about providing good, quality beef for consumers and profitability for their customers. They will be hosting their 27th “2nd Century” Performance Bull Sale at the Ranch the 3rd Saturday in March. The family has all been a big part of the success of their operation from our ancestors and extended family to the kids and grandkids who are actively involved now. They are also very thankful to God for His blessings and favor.

"No one who believes in Christ will be disappointed" Romans 10:11.